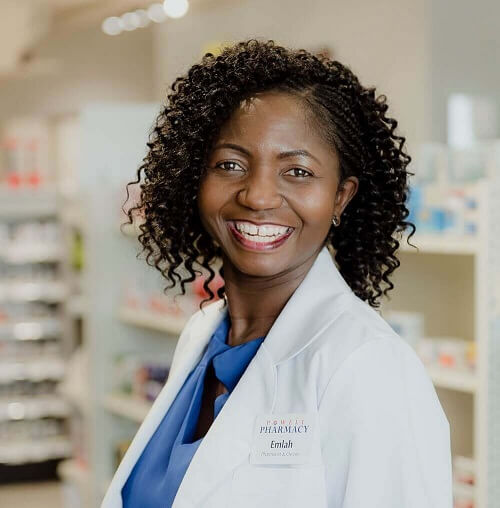 At Powell Pharmacy we are committed to pharmacy excellence and kindness. Our core mission is to use care and innovation to provide safe and effective medication related services to our community.

We are committed heart and soul, to compassionate, empathetic and effective patient education on safe medication use and to a healthy, and balanced lifestyle.

We achieve our mission by using a caring and humanistic approach to Pharmacy Practice.

Emlah Tubuo, the owner and pharmacist in charge at Powell Pharmacy, arrived in the United States in August 2003 with $300.00 to her name and nothing else to call her own. She worked diligently, overcoming daunting challenges in order to get the education she longed for, while treating all people with dignity, love and respect. Prior to earning her PharmD in 2010 from The Ohio State University College of Pharmacy, Emlah Tubuo earned a BS in Microbiology from the University of Buea Cameroon, and an MS in Molecular Biology from Chicago State University. She has lived and studied in both a developed country and the developing African third world country of Cameroon. Her difficult early life experiences had an immense impact on her life perspective, heightening her desire to look deeply into the life of a career both for herself, her patients and her students.

Emlah served as an Ambulatory Care Pharmacist for Nationwide Children’s Hospital, and previously, worked as a pharmacist with the Kroger Chain for 8 years. Her quest for work-life balance and her strong desire to be an emotionally available parent to her three children and wife to her husband, gives her passion for fulfillment and giving to all people. While living and working in her birth country of Cameroon, Emlah suffered from numerous preventable diseases such as Malaria, Typhoid Fever and Dysentery, which kept her out of school several times. This gives her an intense respect for disease prevention through immunizations. She led her pharmacy team to immunize hundreds of patients in 2016 and earned national recognition from The Kroger Co. by ranking among the top 1 percent of immunization community pharmacies out of over 2,100 sites. Additionally, Emlah developed her pharmacy team to provide Medication Therapy Management (MTM) and led her pharmacy to rank in the top five pharmacies in Columbus Ohio for MTM claims billed for four consecutive years. A year later, her pharmacy team ranked in the 100th percentile in the National Outcomes MTM platform.

Emlah was featured in the October 2017 edition of the National Chain Drug Review in the “Excellence in Rx” feature. She has earned multiple awards for her efforts as a Kroger pharmacist including Leader in Patient Care in 2016 and Outstanding Mentor in 2017 from the Kroger Columbus Division. She is an active member of the Ohio Pharmacists Association and serves on the Practice Advancement and Innovation committee. She maintains membership in National Community Pharmacists Association (NCPA) and American Pharmacist Association (APhA). Finally, she has earned multiple APhA certifications to augment her undying need for patient care development and advocacy for the profession of pharmacy. Emlah’s teaching philosophy is to enhance, teach and role model emotional intelligence as early as possible. She strives to motivate pharmacy students to prepare their whole being towards pharmacy practice, while striving towards a healthy, balanced life. She directs a Humanistic Pharmacy course for The Ohio State University College of Pharmacy. She has enjoyed speaking engagements on topics ranging from drug interactions at the community pharmacy, incorporating clinical services into daily workflow, and work-life balance.

Emlah precepts Doctor of Pharmacy students from six Colleges of Pharmacy. Providing optimal education, supporting and empowering patients in chronic disease management via MTM are the mainstays of the Advanced Pharmacy Practice Experiential Education she offers. In 2016 she received the Preceptor of the Year Award from the OSU College of Pharmacy. She also served as a resident preceptor for the Ohio State University College of Pharmacy PGY1 Community Care Residency program. Emlah Tubuo is the recipient of the 2018 Ohio Pharmacist Association Distinguished Young Pharmacist Award and the Ohio State University Josephine Sitterle Failer Alumni Award which recognizes an alumnus who has made outstanding contributions to the community or professional service. She serves on the Alumni Board of Governors of the OSU College of Pharmacy.

She is the founder and owner of Emlah Consulting LLC a pharmacy consulting company providing MTM services to independent pharmacies in Central Ohio. These achievements help to quantify her passion for optimal patient care. Her difficult early life as well as friends, peers, patients, and mentors through the years have given Emlah a kind heart and exceptional patient care skills. Her respect for diverse viewpoints, integrity and resilience make her the passionate pharmacist behind the counter at Powell Pharmacy who will go above and beyond for her patients. Stop by Powell Pharmacy to experience pharmacy excellence and kindness.

Prescription medication plays a critical role in healthcare, but they can also cause harm. The misuse of prescription drugs has become a serious public health epidemic. According to data from the Substance Abuse and Mental Health Services Administration’s National Survey on Drug Use and Health, between 6 and 7 million Americans, age 12 and older, have misused a prescription medication in the past month. Approximately 5,500 people do so for the first time every day. In fact, in the State of Ohio an adult is more likely to die from a drug overdose than from a car accident. Because prescription and over-the-counter medicines are typically, accessible and visible in our homes, we believe children should understand prescription and over-the-counter medication safety at an early age.

Powell Pharmacy leads Medication Safety Education in Local Elementary, Middle, High Schools and the adult and senior community. We have a great partnership in place with the Generation Rx program. We engage students using interactive games such as medication vs. candy, pharmacy jeopardy, good choice vs. bad choice, pretty poisons, pharmacy math, share or not share etc. The activities are part of an educational toolkit created by The Ohio State University College of Pharmacy and the Cardinal Health Foundation.

We are certain that this knowledge will equip members of our community with a solid foundation regarding this very pressing issue of our times. We have age appropriate targeted toolkits with separate curricula designed for elementary, middle and high school students. Visit www.generationrx.org and email info@powellpharmacy.com and we will organize a Medication Safety Presentation at your institution. Thank you for helping us spread this important message!

Choose Kindness is run by a local Powell mom and fellow Clinician Jaime Goldmeyer. She started this movement to fulfill her desire to give back in small ways, while teaching her children and other children humility and thoughtfulness. Her message of kindness is universal and highly resonates with our philosophy of kindness at Powell Pharmacy hence this amazing partnership! It is a reminder that all humans deserve to be treated with respect and dignity. With proceeds from the apparel sales Jaime and her family coordinate and sponsor random acts of kindness right here in our community. Powell Pharmacy is excited about this partnership and with your support we will spread kindness in our community and beyond. Stop by Powell Pharmacy and purchase your choose kindness apparel (they make amazing gifts!).